Reduction of quantity and strategic planning of antibiotic application is a vital issue for the modern industrial farming with the contradictive situation: economical efficacy on one hand, ensuring enough assets for further development and meeting the high food safety standards on the other, insuring quality and safe products for human consumption.

To some extend the situation in animal production was provoked by AGP(antibiotic growth promoters) ban, resulted in overall reduction of antibiotic use, but increased therapeutic antibiotic treatments at the same time. As a consequence new resistant strains of bacteria emerged, affecting food animals and people; however it is related most likely to the misuse or overuse of therapeutic antibiotics, developing antibiotic resistant bacterial strains.

The case with antibiotic resistant E. Coli several years ago in Germany, consumed with wheat germs and caused several deaths, clearly showed the significance of wise antibiotic use and more over the importance of strict  biosecurity measures, which have to be implemented in all aspects of food production.

Biosecurity is a system of  physical bariers and hygiene procedures, preventing the adverse effects of the diseases. It can be defined as a set of management practices which, when followed, reduce the potential for the introduction or spread of disease agents onto and among sites. In other words, biosecurity is an essential component of a disease control program in animal industry.

Given the details above, livestock producers have to put more emphasis on disinfectants which are antimicrobial products, designed to destroy pathogen microorganisms. These substances are very important part of any hygiene and disinfection procedure. With this regard, Danish company Vitfoss offers Stalosan F – a powder disinfectant that provides sustained suppression of pathogens commonly observed in animal housing facilities worldwide.

Stalosan F becomes more and more important for the farm biosecurity, insuring protection of animals during the whole production cycle. Minimizing the risk of infections and consequential antibiotic treatments avoids multi resistant bacteria development and contributes to both – food safety and animal welfare. As a result Stalosan F preventive application leads to better production results and profitability of the modern industrial farming.

For over 50 years now Stalosan F has turned out to be a very useable agent for reducing the consumption of antibiotics and reducing mortality. In many trials with Stalosan F the significant reduction of medication is recorded. For instance, this could be observed in a research project conducted by QAF Meat Industries Pty. Ltd in 2007.

Two groups of piglets were part of the trial during a period of 26 days until weaning. In the trial the basic parameters in form of number of dead piglets and the need for treatment with antibiotics were investigated. See results in the table below.

Other trials in Denmark and UK have shown significant reductions of antibiotic consumption in average of 60%. 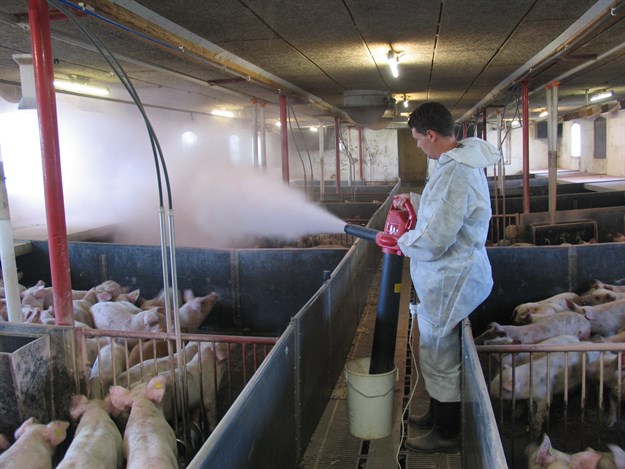 A scientific study from University of Minnesota published in Veterianry Microbiology vol. 136 has demonstrated 99% elimination of Lawsonia exposed to Stalosan F. This study supports several years of experience from Danish pig herds, where Stalosan F has been able to control the bacteria, thus reducing the need of antibiotic treatments.

It is very important, that broad spectrum efficacy of Stalosan F makes no distinction between resistant and non-resistant bacteria, and thus no difference is seen in the effect towards Staphylococcus aureus and MRSA or resistant versus non-resistant strains of E. coli and Salmonella.

The medication reduction is also connected with the fact, that Stalosan F is capable to reduce significantly ammonia, hydrogen sulphide and moisture, minimizing the negative influence of the farm environment to the animal health and inhibits growth of the pathogens.

Similar experience was observed during a Stalosan F farm trial in broiler breeders. Avian Cholera outbreak has been detected in the control flock. Stalosan F treated flock was tested for Pasteurella Multocida infection and showed negative results to the end of the production cycle. It is also a practical proof, that Stalosan F, applied as a part of biosecurity program is capable to protect the animals from imported infections - particularly Pasteurella Multocida.

The unfortunate situation during the trial gave a unique opportunity to evaluate the impact of infectious diseases (particularly Avian Cholera) on broiler breeder performance (the cost of disease) and economical evaluation of preventive Stalosan F application. 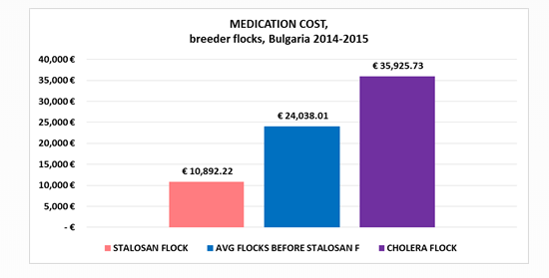 Results showed, that Stalosan F decreased medication cost with 55%, compared to the average farm medication cost and ensured ROI of 1:27 when used as a disease prevention.

In modern intensive poultry production, disease causing pathogens are easily transmitted and can cause significant mortality and reduced productivity. Disease prevention is always less expensive than treatment and the cost of implementing appropriate biosecurity system is negligible, compared to the financial results and sustainable productivity.

Biosecurity should certainly be the corner- stone of any long-term response to disease aggression. Animal producers worldwide should now seriously consider taking steps to institute effective biosecurity programs to exclude disease carrying vectors from entering the farm environment. The use of effective disinfectants is a vital biosecurity tool to ensure that disease carrying vectors are eliminated before they affect the valuable stocks.