A recent scientific report from EFSA showed that between 9 December 2021 and 15 March 2022, 2,653 highly pathogenic Avian Influenza virus detections were reported in 33 EU/EEA countries and the United Kingdom in poultry - in wild and in captive birds. The outbreaks in poultry were mainly reported by France, followed by Italy, Hungary and Poland; those reporting countries accounted together for 12.8 of the 17.5 million birds that were culled during the reporting period. Most of the detections in wild birds were reported by Germany, the Netherlands, the United Kingdom and Denmark. HPAI A(H5) was detected in a wide range of host species in wild birds, indicating an increasing and changing risk for virus transmission into poultry farms. The observed persistence and continuous circulation of HPAI viruses in migratory and resident wild birds will continue to pose a risk for the poultry industry in Europe in the coming months. Highly contagious avian influenza strain H5N1 is sweeping across the USA, infecting millions of domestic and commercial flocks, as well as wild birds. Last month, the USDA said nearly 23 million birds had died of the virus or been killed to slow its spread since the outbreak was detected in U.S. wild birds and poultry in late 2021. To date, H5N1 viruses have been found in U.S. commercial and backyard birds in 29 states and in wild birds in 34 states.

Avian influenza virus can be transmitted by air droplets, dust, feed, or water. Because of the resistant nature of AI viruses, including their ability to survive for a long period at low temperatures, they can also be carried on farm equipment and spread easily from farm to farm.

Several factors can contribute to the spread of AI viruses, such as wild birds and migratory routes; farming and sale (live bird markets); globalisation and international trade.

The frequent occurrence of HPAI virus incursions in commercial farms raises concerns about the capacity and effectiveness of applied biosecurity measures to prevent virus introduction.

The best defence against the spreading of Avian Influenza is a biosecurity system applied on a farm level. Limiting the exposure of poultry to wild birds through confinement and other biosecurity measures provides an opportunity to reduce the risk of the introduction of the Avian influenza virus from wild birds.  Consequently, it is key to decrease the risk of exposure and infection to humans and recombination, which can be easily transmitted among humans.

Biosecurity is a set of management practices, where cleaning and disinfection play a leading role in disease prevention. The viral disease cannot be treated with antibiotics; therefore poultry producers should emphasise on antimicrobial products, designed to destroy pathogen microorganisms in the environment and thus reduce the risk of disease transmission. These substances are a very important part of any hygiene and disinfection procedure, especially if designed for application during the production period.

As a part of biosecurity, Stalosan F becomes a more and more important tool for farm biosecurity, ensuring the protection of the animals during the entire production cycle. Minimizing the risk of infections contributes as well to food safety and animal welfare.

There are several Stalosan F efficacy tests against the Avian influenza virus. The latest was made by the competent authorities in Iran against type H9N2. 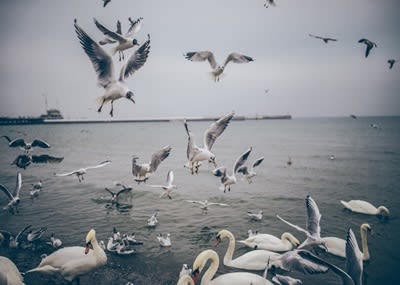 Test methodology included inoculation of the Stalosan F treated, as well as non-treated virus solutions (control group) to the embryonated eggs and the conclusion is, that Stalosan F does not kill or harm embryos, meaning it is safe for the living cells and animal tissues.

The excellent results from the Stalosan F tests conducted against different subtypes of Avian Influenza virus and its broad-spectrum efficacy can be regarded as the first line of defence during animal production. It is an important tool for the farm biosecurity system, effectively destroying viruses in the environment.

For over 50 years now Stalosan F has turned out to be a very useable agent for reducing the disease's transmission and mortality. Additionally, in many trials with Stalosan F a significant reduction in medication is recorded.