The dry period, whilst it’s an opportunity for some body tissues to recover and regenerate for the next lactation, it’s also a vital period to set cows and heifers up for the following lactation. This has profound effects on subsequent health, production and consequently fertility. Cow’s nutrient requirements increase hugely at and around calving, requiring significant metabolic changes.

It’s well documented that the majority of production disorders occur within the first 60 days of lactation and are one of the major reasons for early culling. Attempting to tackle these disorders when they occur in early lactation is purely firefighting the issue and is too late to remedy the situation.

Many scientific studies and trials have proved that the correct level of calcium in the blood at calving has a significant effect on health, leading to better fertility. Milk fever – both clinical and subclinical, is a result of low blood calcium at calving. A deficiency of calcium around calving has a much wider impact to the herd than just cases of Milk Fever. A lack of calcium affects the muscle and immune function of the animal. This reduced function can lead to a cascade of events which have a huge impact on the health and productivity of the herd long after calving (see diagram below). 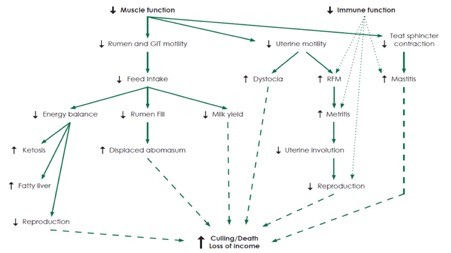 A key example is reduced muscle function which affects the motility of the rumen and the uterus and has a knock-on effect to feed intakes. This can result in calving difficulties, dystocia and Retained Fetal Membranes (RFM). In turn, these events can cascade further, leading to disorders such as ketosis, displaced abomasums and metritis, which impact significantly on yields, fertility, culling and profitability.

Cows suffering from milk fever are between four and nine times more likely to suffer from a miscellany of other metabolic disorders, many of which are related to each other. They each come with a significant price tag not only in treatment and vet costs, but also with losses from future milk production and fertility delays. Cow suffering milk fever are likely to have increased risks: 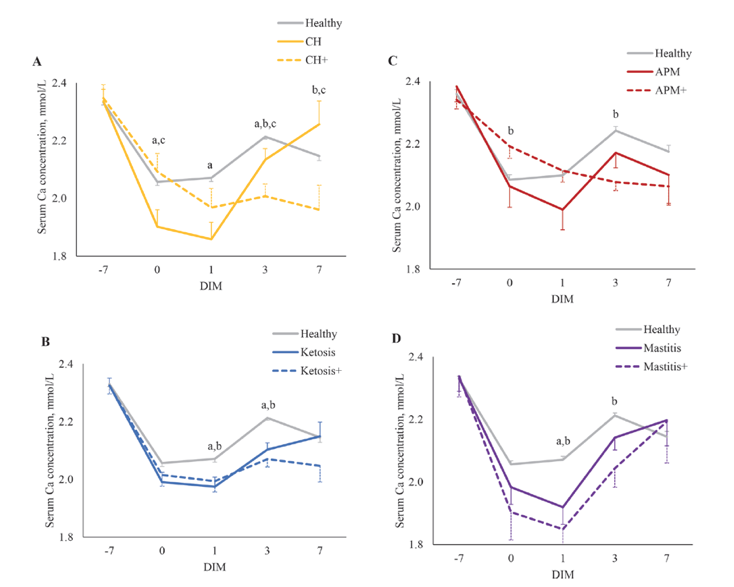 The threshold for sub-clinical milk fever is 2.15mmol/l and even a slight reduction from normal calcium levels can significantly impact production and profitability. A small decrease in blood calcium can increase the risk of:

Increasing blood calcium levels improves fertility and reproductive performance. In a study from Department of Livestock Health and Welfare, Institute of Veterinary Science, University of Liverpool it was shown that for every 0.1 mmol/l increase in blood Calcium there was a 33% increase in the chance of a cow being served and 16% increase in the change of conception. 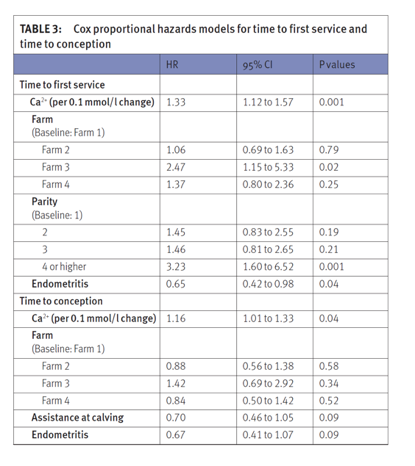 Using X-Zelit®, a calcium binding feed supplement stimulates the cow’s natural homeostatic response allowing the cow to mobilise calcium from her reserves. This ensures that blood calcium levels remain at stable levels around calving, see below.

The effect of maintaining adequate blood calcium levels around calving on fertility can be seen in a trial from Cornell University where the number of empty days were reduced by 19 days in cows supplied X-Zelit which had resulted in stable blood calcium levels compared to the control animals.

The effects on the fertility of these animals highlighted the probability of cows surviving ie being culled from the herd.