Farm faces bad litter quality during the winter time, due to cold weather, excess moisture in the litter, leading to higher mortality and bad production results.

- 6 buildings situated in one place.

- Stalosan F applied regularly to one flock, situated in 3 buildings.

- Trial results compared to the average production results of the farm for the last two years. 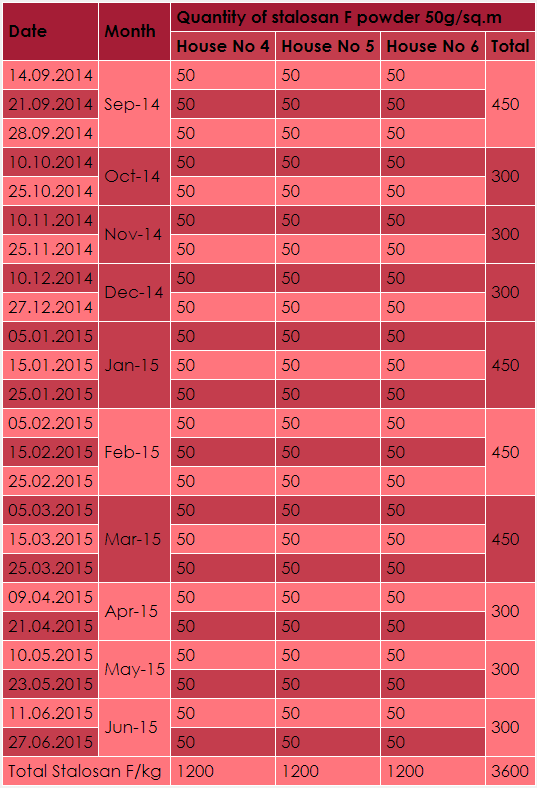 Trial was carried out in3 buildings x 1000 m² each. Stalosan F applied over the litter in presence of birds with a spreader 3 times per month during the winter period and 2 times monthly for the spring/summer season at dosage 50 gram/m².

IV. Procedure and registration of the results:

Sick or debilitated animals are eliminated.

Standard vaccination and prophylactic program was applied, according to the farm practice.

All supplies of feed, water, heating, ventilation and litter quality were equal for all animals.

Notes for the flock age, hybrid and number of birds per building, sex (%), starting and finishing time.

Usually farm experienced difficulties in managing good litter condition, especially during the first weeks after the birds transfer from the rearing farm and during the winter months because of high humidity and low temperatures. Workers spend extra time for litter maintenance (treatment with motor cultivator) and placing extra fresh bedding. For Stalosan F treated flock reduction of 50.07% in consumption of bedding material reported, along with improved animal hygiene and environmental conditions in the building.

Further no racking of the bedding was necessary, saving extra time on litter maintenance and reducing the stress for the birds. Fresh litter was added only to the nests for egg laying.  Results prove the powerful drying effect of Stalosan F.

Improved productivity of Stalosan F  flock is due to periodic sanitation of the habitat. Reduced pathogen challenge extends production period and improves performance. The only reason for early culling of the Stalosan F treated flock was the planned installation of automatic nests.

Stalosan F improved mortality with 48% for the hens and 10% for the rosters. 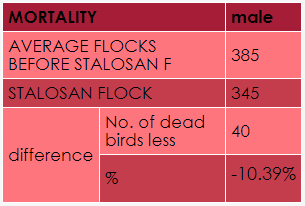 Less infections during the Stalosan F application were also reported like cloacitis, salpingitis, oophoritis and peritonitis in hens. In most cases those are retrograde infections from the environment.

Eggs for hatching difference was 9, 1 in favour of Stalosan F flock.

Improved environment hygiene and health status of the Stalosan F flock resulted in 11.07% higher hatchability of the eggs.

Number of chicks per hen housed 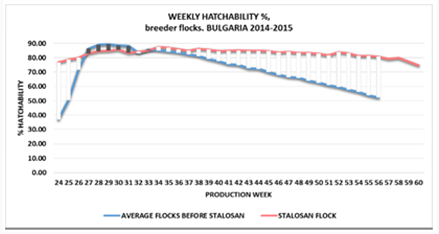 As an average for the previous flocks birds were treated 7 times with antibiotic due to increased mortality.

Stalosan flock were treated twice– once before the peak of the egg production and after 50th week as part of the standard prophylactic program.

The Stalosan F flock showed 79.31 % reduction in antibiotic treatments due to the productive cycle.

Spiking program is an replacement of the males with young ones(or in same ages) in older flock in order to compensate decline in fertility.In Stalosan F treated flock is observed reduction of digital dermatitis, which are one of major cause of lameness and the associated reduced sexual activity of roosters. All avoidable risks of Spiking program, together with the improved condition of the habitat and the drastic reduction of pathogenic strain are the main reasons for the extended life and wellbeing of roosters.

It is similar ROI in case of eggs hatching and day old chicks are offered to the market.