X-Zelit improves the immune function as observed in a decreased expression of neutrophil inflammatory mediators.

In a new study from New Zealand published in JDS, X-Zelit was used to demonstrate the expression of neutrofile genes in hypocalcemic and normocalcemic dairy cows. An effect of the X-Zelit on the immune function was expected as X-Zelit increase the calcium level in periparturient cows. Calcium is an important messenger during immune cell activation and depends on intracellular stores. Hypocalcemia has also earlier shown to have a detrimental effect on neutrophil respiratory burst.

The study was performed in New Zealand on cows grazed fresh pasture supplemented 500 g X-Zelit / cow / d mixed into the maize silage for at least 2 weeks pre-partum. Control cows were offered same diet but without X-Zelit supplemented in the feed ration.

Plasma calcium levels were significantly improved during day 0, 1 and 4 after calving compared to the control level – demonstrating the calcium stabilizing effect of the X-Zelit product (Figure 1). 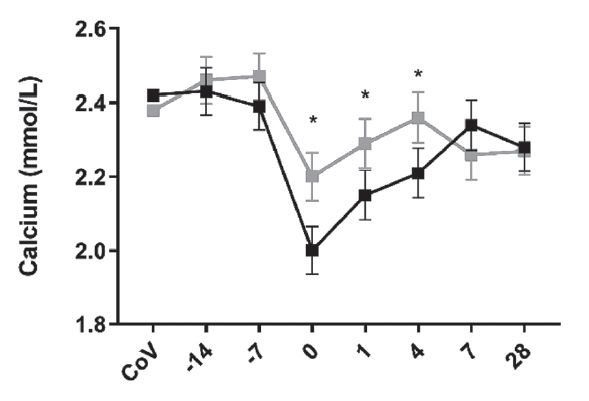 A total of 21 genes were tested in this trial, 2 of them were significantly lower for the X-Zelit groupo and other 6 tended to be lower than the control group. (Figure 2). The few genes affected suggest that the X-Zelit did not affected several pathways involved in neutrophil functions.

Gene expression of the calcium depended immune mediators S100A8, S100A11 and S100A13 was lower for the X-Zelit supplemented cows (Figure 2). Upregulation of these genes has been associated with severe negative energy balance and expression is associated with intrauterine infections. Upregulation of these genes indicate presence of bacteria and consequent inflammation in certain circumstances.

Expression of CXCR1 was lower for the X-Zelit group. In cattle CXCR1 has been associated with impaired neutrophil expression and increased susceptibility to mastitis. CXCR4 is a key regulator of neutrophil releasee from bone marrow under standard and stress conditions. It has also been associated with neutrophil ageing. The lower expression of CXCR4 in the X-Zelit treated animals indicate that the neutrophils are younger and these animals may have less periparturient inflammation compared with control animals. Further indication of a reduced inflammation is downregulation of the genes that encodes pre-inflammator cytokine interferon gamma (IFNG). 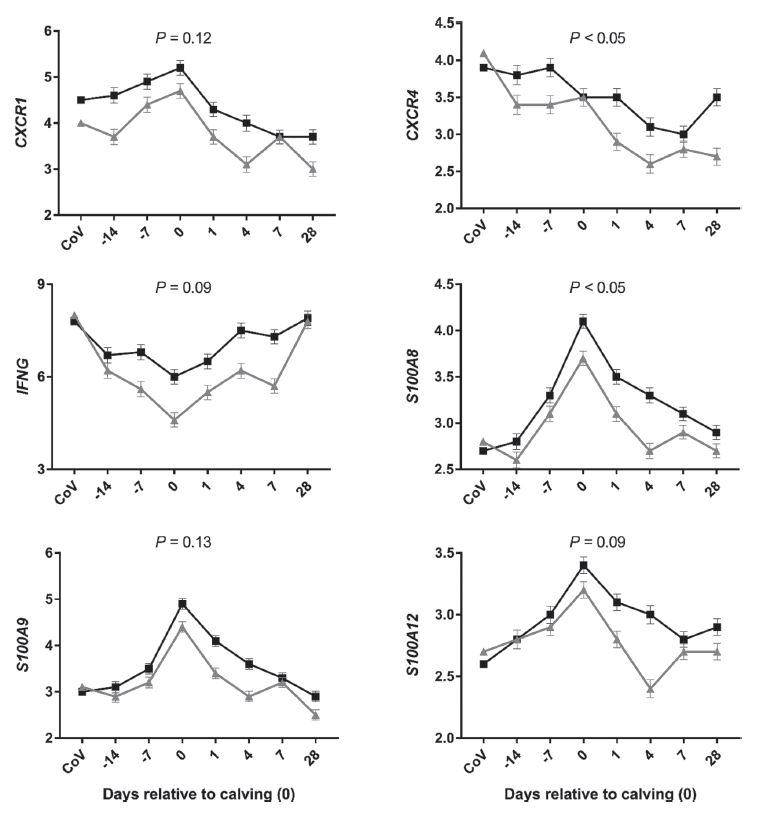 It was concluded that X-Zelit downregulates the immune regulators over the transition period suggesting a dampening of inflammation in X-Zelit-treated cows, which may be indirect results of alterations to mineral availability.