It costs more, but in return it’s more reliable

I’m very pleased, because it saves me about 45 minutes of work every two days in warm weather, Søren Pedersen says.
He is production manager for I/S Pedersen, a farm justoutside Ringkøbing. He is pleased by the decision to use dry (i.e. powdered) acid on the farm when, during periods of warm weather, he premixes TMRs, primarily for dry cows and dairy cows, to inhibit the generation of heat.
It changes his procedures because he no longer has to premix compounds every single day during summer. This has been reduced to every other day.
- The feed stays fresh, and the cows are munching away.
Everyone knows that they don’t feel like eating it when it’s soggy.
Obviously, the whole purpose of ensiling the crop is to preserve it, to maximise the nutritional yield. If properly compressed, no oxygen will be present in the silage, which enables the lactic acid bacteria to quickly produce large amounts of lactic acid. This lowers the pH in the
silage, retaining the highest possible nutritional value. A “good” pH value will depend on the percentage of dry matter, however: the higher the percentage of dry matter, the more tolerable an “elevated” pH value will be. As a rule of thumb, pH should be less than 4.6 when the percentage of dry matter in the silage is 35%. When in doubt, it is a good idea to ask your consultant.

Liquid acid was too “unpleasant"

But when taking out a portion of the silage to make TMR, it is unavoidable that it will come in contact with oxygen. This initiates various fermentation processes and generates heat. As a result, the mixture can easily develop mould as well, a taste that few cows like. But the process can be inhibited by using the right ensiling agent. Previously, Søren Pedersen used liquid propionic acid for TMR mixes, but decided to stop using it entirely as it was impractical
and dangerous to use.
- Handling liquid acid is nasty business. Although we were cautious and mixed the acid with water first, it was still unpleasant. We’d rather use an alternative, which back then was to mix the TMR every single day, he says.

He shows us around the farm where he is also assisted by a farmhand in the yellow-brick cow barns from 1998 and 2002 respectively. He apologises for the “mess” caused by the sweeping machine that left behind exactly 12 straws on the floor of the barns’ entrance
section. The barns are laid out so that when moving the cows, the entire process can take place indoors. This is practical, but the production manager is particularly proud of the fact that the farm has received the maximum bonus from Arla for the past 12 months for maintaining an average cell count of less than 150,000, among other reasons.

At this time of the year, and for many months going forward, it is hardly unusual to see workloads at farms throughout Denmark quickly spike. The farm where Søren Pedersen is production manager is no exception.
- Dry acid costs a little more. I don’t actuallyremember how much. But the time I save is
also worthsomething. This should never be underestimated, becauseI’m worth more for the farm doing other things. We made atrade-off but without specifically doing the maths, he says.
Søren Pedersen is pleased that he made this trade-off. At farms all over Denmark, farmers are looking for ways to optimise operations and, before making any changes, they typically assess the benefit in relation to the investment.
Choosing dry acid was no exception for Søren Pedersen in this case.
At the same time, the change means that the farm, as a workplace, no longer needs to be HACCP registered. This is because he and the other employees no longer use liquid acid.
HACCP is an acronym for Hazard Analysis and Critical Control Points, which are monitored by the Danish Veterinary and Food Administration in Denmark. This type of registration requires the payment of an application fee (almost DKK 500) and an annual basic fee of around DKK
1,500.

Although it is true that such a minor expense would rarely prevent a modern farmer from using a product, he knows that if he decides to use liquid acid, he will be spending more time
at his desk. 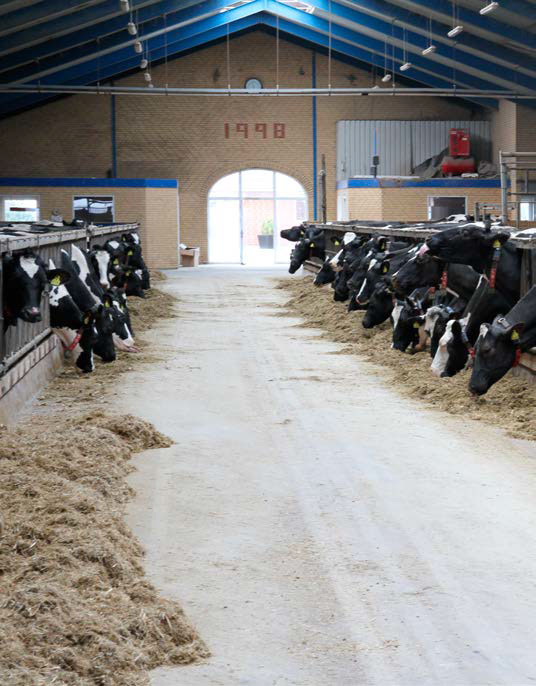 FACTS about the farm

The dry acid product used by Søren Plauborg is relatively new on the market and its name is FreshFoss. He made the change on the advice of a DLG consultant, and Søren wasn't included in the pilot group of dairy farmers. But the consultant, according to Søren Plauborg, had found it to be ‘very satisfactory’. The advice was appreciated, because it is sometimes difficult to select a product because of the others on the market with the same function.

FreshFoss was introduced last year after being tested more than 100 times in 40 different silage mixtures.
- We could tell that the farmers liked it, says Per Theilgaard, who manages the ruminants and supplement product area at Vitfoss, which manufactures the product.
He states that the product contains a ‘combination of acids’. The precise acid composition is a ‘trade secret’ however.
FreshFoss is available in a conventional version and a version approved for organic farming