Stalosan F has been proven effective against many problems including thrush, mud fever, certain forms of coughing and ammonia and moisture in the bedding

The straw stays fresh longer when using Stalosan F, which typically reduces the straw consumption by 10–15%. In addition, using Stalosan F at least once a week will considerably reduce the number of flies.

In horse stables, spread Stalosan F at least once a week – across the entire floor area or existing mat and particularly in wet, damp areas and along edges.

The dosage is always 50 g/m²(1 pound per 100 sq. feet), but it may be very valuable to concentrate on the critical areas in the stable. 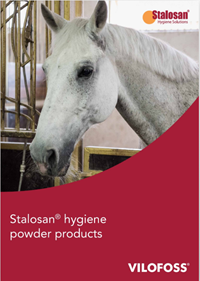