X-Zelit is highly effective as a calcium binder without the hassle of a common DCAD diet.

Anionic salts (DCAD) have been prevalent in many countries for 30 years. In the very countries where there has been a tradition of using anionic salts, the introduction of X-Zelit had a rapid spread. In our experience this is due to the fact that farmers are used to focusing on the dry cows and thus have worked with products against hypocalcaemia already. Therefore, they also know how difficult it is to handle DCAD in practice and that the success rate is low. Simple comparisons of plasma calcium levels at calving easily demonstrate the difference between X-Zelite and feeding with anionic salts. Many farmers perform this test on-farm.

An Australian trial from 2018 has directly compared the effect of feeding with X-Zelit vs. DCAD. The trial examined blood calcium content, productivity, rumination time and milk yield (Figure 1). Cows supplemented with X-Zelit demonstrated higher plasma calcium values in early lactation compared to DCAD feeding. The improvement was also observed in the production traits as both milk yield and rumination time was higher for the X-Zelit supplemented cows. The rumination time was significantly increased in the X-Zelit group, which confirms other experiments which demonstrate that the animals appear to be better equipped for the upcoming lactation.

Figure 1a and 1b – Ruminating time and milk production for groups of cows been supplemented either X-Zelit or Bio-Chlor: 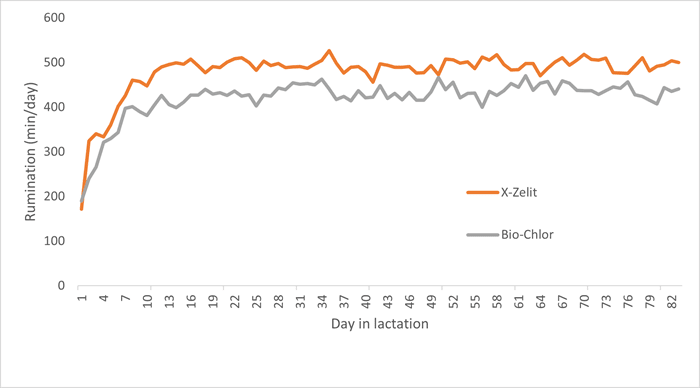 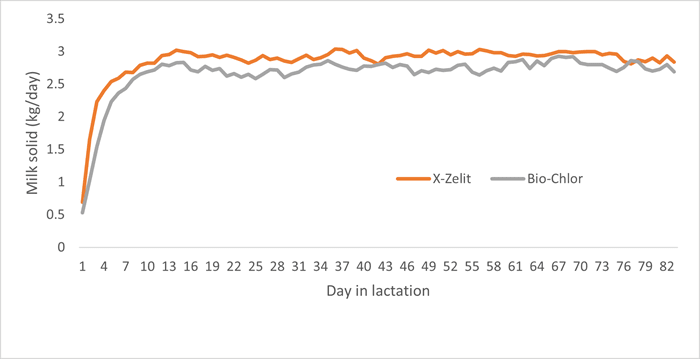 X-Zelit simplifies the prevention of subclinical hypocalcemia in dairy cows

Another field trial that compared X-Zelit as a calcium binder to a DCAD diet was performed in two large commercial farms in the US. Blood samples were taken within the first 24 hours after calving. The average plasma calcium level was higher in the X-Zelit groups on both farms, with a lower frequency of subclinical hypocalcemia.

Do you want to calculate your economic benefits? Try the X-Zelit calculator here